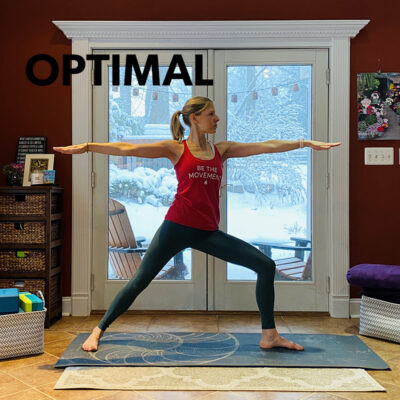 TENACIOUS TUESDAY ~ In the yoga I first learned, there was a concept called ‘peak pose.’ You work through the flow to build towards holding one key, challenging posture. My type A personality was all in! When I came to LYT, however, the focus wasn’t on ‘peak,’ but ‘optimal.’ Optimal posture, optimal alignment, and the strength and stability to support those things. It was a mindset shift, but a gamechanger.

This week I listened to an inspiring interview with @rich_diviney on @lewishowes’ podcast. Diviney, a Navy Seal, spoke about the importance of focusing on optimal performance versus peak. Attention captured! He described peak performance as something we need to schedule and prepare for. Optimal performance, he said, is what everyday life is about – “how can I do the very best in the moment with what I’ve got?”

When I began focusing less on reaching a peak and more on learning optimal ways of doing things, so many things on my mat and in life became more sustainable, more productive, less painful, and more enjoyable. This is the biggest shift I see in my students and cancer patients I work with as well. There is a visible sense of release when the body comes into a more optimal position and movement becomes fluid. There is a sense of empowerment when day-to-day tasks feel easier because of small, but mighty incremental changes they’ve been making.

Diviney wrote a book called ‘The Attributes,’ now up next on my Audible. In it he defines ’25 Hidden Drivers of Optimal Performance.’ Like LYT, he pinpoints adaptability as one of those. I haven’t listened yet to know if he included tenacity 😉 On the podcast he shared how these traits allowed non-peak performers to still be incredibly successful because of their dedication to a more optimal approach. Amen.

If you’re been navigating life peak to peak or resisting things out of fear of not making the climb, I get it. This is permission to release those ideas and focus instead on finding more optimal ways of experiencing each day. I think you’ll find the unobstructed view even more expansive.🌅#BeTenacious

The Moment You’re Ready to Quit

Getting Back in the Flow